Last Updated on December 7, 2022  Allen Eskens is an American author known for his Joe Talbert / Max Rupert crime mystery series. Reading his books in order means picking us this relatively new but popular series. While the two series seem separate, the Allen Eskens books should be read in order from The Life We Bury to the latest one published, The Deep Dark Descending, as they are related. The author has also written two standalone novels.

Here are the Allen Eskens books in order of publication and chronological order. 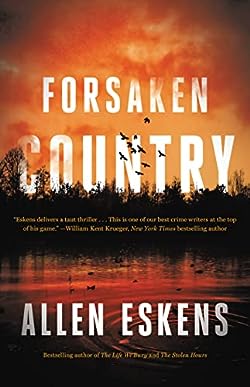 Allen Eskens was born to blue-collar farming parents and was raised in central Missouri. When he was young, Allen helped his dad clean tools and worked at the warehouse (his father owned a drywall company at the time). After high school attended the University of Iowa in Iowa City and part-time he worked for a drywall contractor. Then, in 1986 he moved north to Minnesota to study further. Allen enrolled at the University of Minnesota from where he got his BA in journalism.

After leaving school, Allen Eskens got a job working for a judge in St. Peter, and then he started taking classes and study creative writing at a few prominent schools: he took the M.F.A. program at Minnesota State University-Mankato, and then took further classes at the Loft Literary Center and the Iowa Summer Writer’s Festival.

After working as a practicing criminal defense attorney for 27 years, Allen Eskens left his law career at the beginning of 2017 to write novels full time.

His debut novel, The Life We Bury, was published in 2014. It features Joe Talbert, a University of Minnesota student, who decides to interview a murderer who was released from prison as he now has a very short time to live due to cancer.

Towards the end of the book, the main character in the author’s next novels, Max Rupert, also features, but to a lesser degree. Allen Eskens’ first novel was so popular that it won the Left Coast Crime Rosebud Award and a Barry Award for the best paperback original.

In an interview, the author mentions that while in college, he had the very assignment he gives Joe in his book: that of interviewing a person and writing the story of the said individual. The assignment took him to a nursing home, just like Joe Talbert ended up doing in The Life We Bury. That’s where Allen Eskens got the idea for his debut novel in the first place.

The next three books all feature Max Rupert, although the books are not officially part of a book series. One of the books also includes Alexander Rupert, Max’s older brother.

The latest book was published in 2018 with the title The Shadows Behind and it is the direct continuation of The Deep Dark Descending.

While the author doesn’t officially consider his novels as part of a series, I still suggest you read the Allen Eskens books in order, as at least books 3-5 are all about Max. You will get to learn about him, his brother Alex, and some of his friends and partners. And you find out what drives Max to do what he does in the latest book.

In The Life We Bury, Max Rupert only appears towards the end of the book. At the time I thought Joe Talbert was the main character. And he was, but only in that very first novel. Another important character was Max’s brother, Alexander, who appeared in the next novel as well. However, the longer I read the book series, the more Max became the focus on the next books.

The book where Alexander’s story was told was The Guise of Another. Here he was the center focal point, although Max Rupert appeared as well. I started reading the series with the so far last novel, The Deep Dark Descending, where Max has the center stage in the book, so there I was convinced that Max would feature equally in the author’s previous books as well. I was wrong, however, because if I had started the series with The Guise of Another, I would have believed that Alexander was the cop the series was about.

That’s why reading the Allen Eskens books in chronological and publication order is crucial because you will get to learn about several characters through each book. Every single book has a separate character as the focal point, although each book also features the other main protagonists to a lesser degree. The characters are all interrelated somehow, and the bit you pick up about each in the previous novels will be greatly expanded in the next book.

A newer Allen Eskens book, The Deep Dark Descending ended on a major cliffhanger and I can’t wait to see what happens next. Max made some very un-cop-like decisions which would definitely change his entire career – if he still has one. Based on the previous books in the series, it may very well be that someone else will be featured in the author’s sixth novel, and this is why the author’s books are interrelated, but they are not part of a given series. It is a pity though because I enjoy the character of Max Rupert (so far) the most. The Max Rupert books are technically The Guise of Another, The Heavens May Fall, and Deep Dark Descending.

The Shadows We Hide is the last Allen Eskens book published in a series, however, it is also the second Joe Talbert novel, as it is a direct continuation of The Life We Bury.

The USA Today bestselling author’s first standalone novel, published in 2019, Nothing More Dangerous, is, in fact, the first book Allen Eskens ever wrote and only got to release now with Mulholland Books. The second standalone book is Forsaken Country, published in 2022.

His first published novel, The Life We Bury was awarded Best Debut Novel of 2014 during the Left Coast Crime Conference. It also won the Rosebud Award and was nominated for the Edgar Award, the Thriller Award, Anthony Award and the Barry Award for Best Paperback Original novel, followed by the Minnesota Book Award.

The publication order of his books is listed above.

9 Responses to “List of Allen Eskens Books in Order”