Last Updated on March 6, 2022 Alex Kava is an American New York Times bestselling author known for her Maggie O’Dell mystery series, which I have read and really enjoyed. Her first novel, A Perfect Evil was also my first encounter with her writing. I got hooked, seeking out the rest of the books as soon as they were published.

Here I have put together the list of all Alex Kava books in order of reading (chronological, as well as in the order of publication) for her Maggie O’Dell series, her standalone novels, and her Ryder Creed series, as well as her short stories, Maggie O’Dell collections, and novellas. 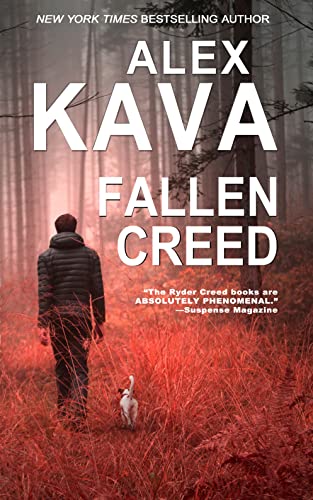 J.T. Ellison is the author of the popular Taylor Jackson books

Erika Spindler is the author of the Stacy Killian books

About the Ryder Creek Series

The Ryder Creed set of books is a spin-off series from the main Alex Kava series, Maggie O’Dell, which features the famous profiler. Maggie also appears in the series as a supporting character.

The first novel was released in 2014 with the title Breaking Creed, introducing to us Ryder Creed, an ex-marine who is focusing his time now on training rescue dogs. His company is called K9 Crimescents, which is quite fitting.

Creed has been quite popular recently due to his dogs that found a lot of drugs that were being smuggled at the Atlanta airport. Now Creed and his team is called to search aboard a commercial fishing vessel, where they found a secret compartment full of smuggled people.

While doing so, Ryder helped a teenage girl escape due to some old trauma at home (his little sister went missing many years ago).

In the meantime, Maggie O’Dell is also working a case where she finds Ryder Creed’s name on a hitlist. While gangsters are going to his home to destroy him and everything he holds dear, Creed is not a simple backboard either. He is waiting for the Cartel hitmen with his own surprises.

This novel brought the main character to people’s eyes, and Creed became a huge success from this very story. As a person, he is a likable guy, but he has his own shadows from his time spent in Afghanistan. Spending time with his dogs and training them is a healing time and measure for him, helping him wake up from the past nightmares.

In Silent Creed, published in 2015, our main character and one of his dogs is called to a mudslide in North Carolina. While sifting through the debris to find any lost humans, a second mudslide occurs, and Ryder is buried alive. His dog, Bolo, escapes, and he finally leads the rescue team to the place where Ryder is located, aiding the team in fishing Creed out from the debris.

Reckless Creed is the third novel in the Ryder Creed series, published in 2016. Here Maggie O’Dell and Creed are working together to fit the pieces of several separate cases involving a dead missing woman, dead geese on a lake, as well as a young guy jumping to his death from his thirtieth floor hotel room in Chicago. What connects all these seemingly separate cases? It is up to the main characters, as well as Grace, another search and rescue dog to put the pieces together.

The fourth novel is Lost Creed, published in 2018. It goes back to the main character’s trauma about his missing sister (a past even that had been mentioned in the first book, Breaking Creed). Back then Ryder was 14 and his sister, Brodie, only 11. Maggie O’Dell appears once again with some clues about Ryder’s missing sister, which leads Ryder to finally be able to go after the possibly devastating truth.

Desperate Creed (published in 2019)finds our MC (main character) and his team after a tornado in order to find any survivors. However, as the storm picks up, it seems they are now fighting to save themselves as well. Not only that, but there is also a killer on the loose who is after Francine “Frankie” Russo who witnessed the murder of someone nearby. Can everyone escape from the tornado while also escaping and even catching the ruthless killer who wants to silence Frankie once and for all?

Hidden Creed is the author’s sixth novel, published in 2020. Grace, one of the rescue K9 dogs finds a shallow grave in an isolated part of Florida’s Blackwater River State Forest. But this body should have been stayed buried forever. As Creed and his dogs are searching for more human remains and clues to finding the killer, the killer is hell-bent on keeping his secret hidden forever. And he seems to know the forest way better than everyone else.

Fallen Creed, released in 2022, is the seventh novel in the Ryder Creed series. Ryder and Maggie are working again together, along with also Special Investigator, Tommy Pakula, who helped find Brodie, Ryder’s sister, before. When a rural postman finds black, plastic bag ditched at the side of the road, they can’t but try to connect this case to another of a missing woman who had disappeared just the same morning. While in Hidden Creed the main force was the forest and in Desperate Creed it was the tornado, now the K9 team has to fight the harsh winter with a heavy snowstorm that impedes Grace’s work since the dog had never worked in snow and cold before, and also makes it way more difficult to find the tail of a ruthless killer who doesn’t want to be found.

New York Times bestselling author Alex Kava was born in 1960 in Silver Creek, Nebraska. She wanted to write books from a young age, however, her parents, while valuing education, classified reading books that were not part of study rather frivolous.

Reading for fun was not encouraged in the family. So Alex (born Sharon M. Kava) wrote her stories on the backs of calendars and only shared them with her brother.

So her parents would not see her writings, she hid everything she wrote during her young years in a shoe box under her bed.

After leaving college she got several jobs, some of them in the fields of marketing and advertising. Eventually, she started her own graphic design firm called Square One where she created logos, food packages, brochures, and newsletters for major corporations.

In 1992 she started to work as director of public relations of her attending college, where she remained until 1996, which is when she switched to writing books.

The author published her first novel in 2000, titled A Perfect Evil, which would become the first in the Maggie O’Dell series.

Initially, the author chose the pseudonym Alex to disguise her gender, however, while she keeps writing under the name Alex Kava, she now no longer hides who she is.

The author Alex Kava is a member of the  International Thriller Writers as well as the Nebraska Writers Guild and her books have been so far sold all over the world in over 4 million copies.

Her popular crime mystery series focuses on Maggie O’Dell, an FBI profiler in Nebraska, who is called in to profile sadistic serial killers and hardened criminals all over the country, and does much more than simply profiling.

In the first book, A Perfect Evil, first introduces us to Maggie. When a small town gets a serial killer who is targeting kids, the local sheriff, Nick Morelli, knows he’s way out of his league, so he calls in the big guns.

Maggie is an FBI expert profiler who is sent to check out the situation. While the two are trying to solve the case, they also get strongly attracted to each other. Except, Maggie is married.

I love this series. I’ve read pretty much all the book except for the last one, Stranded. I love books with twisted, sadistic and ruthless serial killers and reading about those who catch them. If you enjoy reading gory and chilling novels, this series by Alex Kava totally fits the bill. It’s definitely not a cozy, and you’d better have a fondness for uber- suspenseful books, in which case the Maggie O’Dell series will become a dear favorite.

My only gripe with this series? I wish the romance between Maggie and Nick Morelli (what a great name!) were going in the direction I wanted it to. But one can only hope…(and no, this is not a romantic suspense series, the romance aspect is almost non-existent).

The author’s newer series, Ryder Creed, features Ryder, an ex-marine who is now working as a K9 search-and-rescue dog trainer who, every now and then, teams up with Maggie O’Dell to solve cases.

Ryder was first introduced to us in Stranded, the last Maggie O’Dell book. He suffers from PTDS from his tour in Afghanistan and is now trying to put his life back together. Hannah, his good friend, and Grace, the abandoned dog that Ryder Creed finds and starts working with, are there to help him go through the tough times.

In Breaking Creed, the first book in the series, Ryder gets involved in a case of human trafficking which put a target on his back. The Cartel has a list with his name on it and he might be just their next kill. Currently, the latest Ryder Creed book is Lost Creed, published in 2018.

The author Alex Kava loves dogs, she had and has dogs, so it felt easy for her to introduce a new series that features dogs as main characters. Also, she even added Maggie O’Dell a dog in one of the books.

The Alex Kava books have sold over 6 million copies worldwide, and they have been so far translated into several languages, and have been published in over 30 countries. She has been made a bestselling author not only in the US but also in Poland, Australia, Germany, the United Kingdom, and Italy.

Alex Kava is a member of International Thriller Writers and the Nebraska Writers Guild.