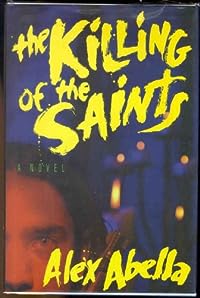 The Killing of the Saints

A brutally authentic tale of crime and the law in Hispanic Los Angeles. Mingling commerce, witchcraft, mysterious taboos, love and redemption, this intriguing mystery unveils the seductiveness of L.A.’s strange alliances, as a court-appointed private investigator takes on the case of two Cuban “Marielitos”–followers of the voodoo-like Santeria cult–who are accused of a vicious massacre.

Latin American magical realism makes further inroads into mainstream American fiction with this unusual courtroom thriller set in the milieu of the Los Angeles Cuban refugee community of practitioners of the Santeria cult.