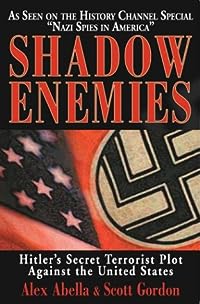 Here for the first time is the incredible true story of one of Hitler’s most diabolical plans: to wreak havoc and terror in America’s cities through the hands of carefully trained German agents whose goal was to sabotage manufacturing plants, cut off New York City’s water supply, and bomb train stations and Jewish-owned department stores.

Shadow Enemies follows the incredible facts of this episode, from the recuitment and training of the agents to their landing on the shores of New York and Florida and their successful infiltration into American society, and from there to the desperate attempts of the FBI to apprehend them before they could put their plans into effect.

With exclusive access to previously classified material, the authors of Shadow Enemies present a unique account that not only follows the unfolding of the plot from the outside but also affords a fascinating glimpse of the interior motivations and fears of a key member of the Nazi cell. Equaly fascinating is the second part of the story. Fearful that a civilian jury might be led to find the defendants innocent, President Roosevelt ordered that, since the agents had been captured in the act of espionage during wartime, they had no civil rights and could thus be tried by a hitherto unknown military tribunal. The resulting trial led to the execution of six of the eight conspirators only two months after their arrest.