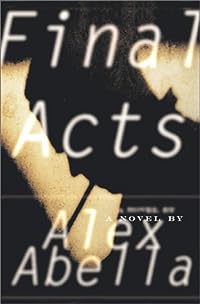 by Alex Abella
Third book in the Charlie Morell series (2000)

When the decapitated bodies of young women appear along the California coast, Morell, hero of The Killing of the Saints and Dead of Night, returns to investigate what appear to be cult-related murders. After working for years as one of Los Angeles’s supreme and most controversial criminal defenders, Morell suddenly finds himself sitting in the defendant’s chair, and only Mexican-American lawyer Rita Carr %151; a feisty addition to the ranks of female sleuths %151; can help prove his innocence.

Battling her own demons, past and present, Rita must jeopardize all she holds dear before she can get Morell off the hook and bring the real killer to justice.

Spinning the narrative from both perspectives, Morell and Rita keep their deepest secrets hidden from each other until the final terrifying end. Final Acts, Abella’s latest tale of murder, mystery, and the occult, is sure to make any reader an instant fan.