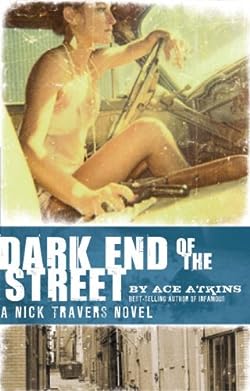 The Dark End of the Street

With a precise eye for detail, Atkins takes Nick Travers on a journey into the hidden pockets of New Orleans, the battered roadhouses and truck stops of Mississippi, and the streets of Memphis that only an insider could know.

The plan is simple. All Nick Travers, a former professional football player turned professor, has to do is drive up Highway 61 from New Orleans to Memphis and track down the lost brother of one of his best friends. But as Travers knows, these simple jobs seldom turn out smoothly.

His friend’s brother is Clyde James, who, in 1968, was one of the finest soul singers Memphis had to offer. But when James’s wife and close friend were murdered, his life was shattered. He turned to the streets, where, decades ago, he disappeared.

Travers’s search for the singer soon leads him to the casinos in Tunica, Mississippi, and converges with the agenda of the Dixie Mafia, a zealot gubernatorial candidate linked to a neo-Confederacy movement, and an obsessed killer who thinks he has a true spiritual link to the late Elvis Presley. Welcome to Ace Atkins’s new South, where you won’t find a single southern belle or dripping magnolia.