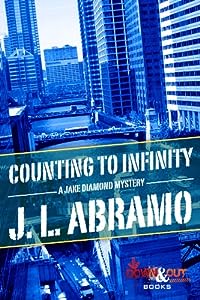 San Francisco private investigator Jake Diamond is known for his stained neckties and a stash of sour-mash whiskey, but Jake is more likely to be toting a worn paperback Classic novel than a handgun. More over-easy than hard-boiled, Diamond can be beaten up and knocked around without taking it too personally; but when his friends and loved ones are threatened, it’s a different story.

When a Chicago thug known as Ralph Battle bursts into the office of Diamond Investigation waving a 44 magnum at Diamond and his trusty assistant, Jake has the distinct feeling that missing his lunch of fried calamari may not be the worst of his problems.

Jake accompanies Battle to Chicago at the mandatory request of Max Lansdale, a mob-connected attorney, who asks Jake to search for a pair of ghosts and will not take no for an answer. Pushed to the edge, Jake is ready to put his rusty .38 to use to get Lansdale off his back. Running between San Francisco, Chicago, and Los Angeles, Diamond tries to stay one step ahead of the man who will have Jake killed with no remorse as soon as Diamond proves useless.

With the help of Joey Russo and a team of Jake’s familiar cohorts, including Vinnie “Strings” Stradivarius, Darlene Roman and Sonny “The Chin” Badalamenti, Jake may be saved from becoming a murderer himself. Maybe. Trying to escape the wildest ride of his life; Jake is counting on luck, counting on a group of unlikely heroes, and counting to infinity.