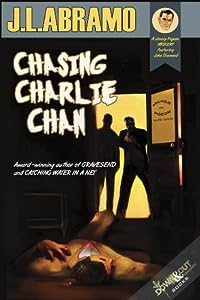 by J L Abramo
Prequel in the Jake Diamond series (2013)

Lenny Archer had more than a fair share of tough times and hard knocks, but he had finally decided to stay in the game rather than cash in his chips.

Then, two late-night intruders at the private investigation office of Archer and Pigeonviolently take the choice of life over death out of Lenny’s hands.

Jimmy Pigeon is determined to discover who killed his friend and partner. He may have to learn what became of the actor who portrayed Charlie Chan in the thirties, and who assassinated a charismatic mobster in the late-forties, before he can identify Archer’s killers.

LAPD Lieutenant Ray Boyle is not anxious to get tied up in the Chinese fire drill that is the Archer murder case, but he is far less inclined to get anywhere near the question of where a former Heisman Trophy winning football player was on an infamous night in June 1994.