Reading the Lincoln Child books in order really depends on whether you want to read his solo works or the books written together with Douglas Preston.

Listed below you will find the Lincoln Child books in the right order of reading, both with Douglas Preston and his standalone novels. As the Pendergast series is the culmination of the two co-authors works, I have listed it separately on the Pendergast Novels in Order page. 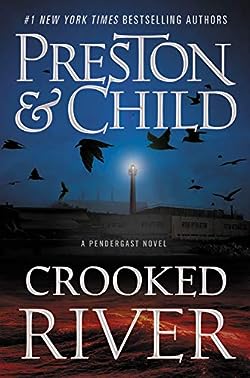 In Collaboration With Douglas Preston

Lincoln Child is an American thriller author best known for the popular Pendergast series, which he co-authored with Douglas Preston. The two writers have drafted, however, additional books including the Gideon Crew which currently consists of 4 books, and several standalone novels.

Lincoln Child was born in 1957 in Westport, Connecticut. He attended the Carleton College in Northfield, Minnesota from where he graduated with a major in English.

In 1979, soon after graduation, he started working for St. Martin’s Press as an editorial assistant, from where he graduated to becoming a full editor by 1984, editing hundreds of book fiction books from both sides of the ocean. Being an editor, the author got a good idea about what works in books and what don’t, and what is the best way to flesh out his own novels.

Three years later, in 1987 he left the publishing house and started working at a life insurance company called MetLife as a systems analyst. While still working there, he wrote his first novel in collaboration with Douglas Preston, called Relic, and not long after he left the business world to write full time.

Relic, published in 1995 by Tor Books was a major hit with the readers and critics alike. The book was turned into a movie adaptation in 1997, however, the movie received mixed reviews, mostly due to the fact that Special Agent Pendergast was not in the movie. At all. And let’s face it, if you’ve read the book series, you know that he is pretty much the most important ingredient of the series, which, coincidentally has the FBI agent’s name.

After the acclaimed success of Relic, the author duo continued their work in fleshing Pendergast out some more and created several additional books. The Pendergast series is the culmination of the two author’s careers so far. They have written many good standalone novels, but in my readers’ opinions, nothing comes even close to Pendergast.

Apart from his work with Douglas Preston, Lincoln Child has written several solo books, however, unlike his partner, his separate work is all fiction, which includes standalone novels and his popular Jeremy Logan series. For his books, Lincoln Child got on the New York Times bestseller list in 2011. The first solo novel the author Lincoln Child wrote was in 2004 with the title Utopia, while also continuing the collaboration with Douglas Preston on the Pendergast series and the Gideon Crew series.

Reading the Lincoln Child books in order for his solo works means basically picking up the Jeremy Logan series, including Deep Storm, Terminal Freeze, The Third Gate, The Forgotten Room and Full Moon, which currently includes five books. He also wrote two standalone novels which are quite good as well. I recommend you pick them up.

Utopia, published in 2002, is set in an amusement park in the future. Dr. Andrew Warne is the lead programmer and designer of the park that relies mostly on robotics and holographic projections,  and when some issues come up which require him to go to the park. When he gets there, he realizes that someone, a man of no identity holds the park hostage. Wayne must not only figure out who the criminal is but also stop the criminals once and for all. This became especially urgent when it turns out that his own daughter is held hostage by the criminals in the park.

I enjoyed the futuristic setting of the novel, which is very different from the Pendergast series he collaborated on with Douglas Preston. The story is fast-paced and the technology advanced. There is enough suspense to keep the reader engaged from the first page to the very last.

The author’s second standalone novel, Death Match, was published in 2004. It is yet another sci-fi techno-thriller, this time focusing on dating sites and matchmaking. If you’re looking for computerized dating systems that can easily find your perfect match within 99% accuracy, look no further.

Of course, then you also get things going awfully wrong. Eden Inc is the company that offers matchmaking services. When forensic psychologist Christopher Lash is asked to check out the details of a case where a perfectly happy couple committed double suicide, he initially can’t find anything wrong. But when a second couple commits suicide as well, he realizes that there is something very wrong there and can’t feel but wonder whether the suicides are genuine or there is something else at play. Like maybe murder.

I found it interesting how the Lincoln Child books written solo are so different from those written together with Douglas Preston. For example, some of the books in his Jeremy Logan series have even elements of horror within (The Third Gate comes to mind here). If anything, it is certain that the author Lincoln Child is very talented, and I hope he never stops writing.

The latest in the Lincoln Child books included in the Jeremy Logan series is Full Wolf Moon, featuring Jeremy who wants to simply finish his book in peace. For that, he goes to a secluded writer’s retreat where, sadly, some people recognize him, including the park ranger who has a very interesting case for him to check out. I enjoyed this latest supernatural thriller a lot where werewolves were prominently featured. Of course, what exactly is about werewolves and are they real are questions that will be answered in the book.

Lincoln Child is currently living in Morristown, New Jersey where he is working on his next book.