The Harry Bosch novels in order are the perfect read for anyone who loves heart-stopping thrillers with lots of action and great characters.

So here are all the Harry Bosch books in order by Michael Connelly in reading and publication order, followed by Connelly’s other series including Mickey Haller, Terry McCaleb, Jack McEvoy and Renee Ballard. 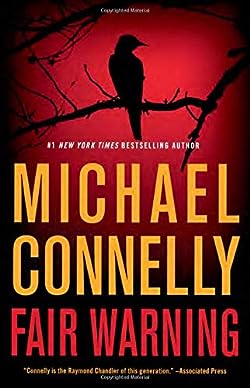 Should We Read the Harry Bosch Novels in Order?

I’ve read all the Harry Bosch novels so far (including the related Mickey Haller books) and personally I think reading them in order is best if you can get hold of the books in the right order. Granted, each novel has one mystery that Harry solves, however, the character really grows from book to book.

You can see in each of the novels that the author Michael Connelly gets more and more attached to Harry and really writes about him with a passion. It is a pity to miss out on that.

Harry is a fun and multidimensional character with a real-life story of his own. In the first novel, he is accused of killing a Vietnam “tunnel rat” whom he happened to know many lifetimes ago. I remember the book was full of atmosphere and a fast read. It literally hooked me on the series and I have read everything he has written since then.

Currently, Two Kinds of Truth is the latest book in the Harry Bosch series (#22), published in 2017. In this book, he is a volunteer cold case cop at SFPD and is asked to help with a case involving a pharmacy where a young employee was murdered.

At the same time, he gets involved in a case started by the newly created LAPD Conviction Integrity Unit, which tells him that there are signs showing that he mishandled some old cases back when he was working for the police.

Since he left the police in relatively bad terms, his old colleagues are not overly eager to help him save his reputation. Now Harry has to work the murder case while trying to get to the bottom of who framed him and how he can clear his name and reputation as well.

One question I get asked a lot is this

Harry is the ultimate detective. Initially, all the cases seem hopeless, unsolvable, but Harry is the one that finds something small that belongs to the case.

And once he found that short thread, he follows it until he uncovers more threads, and follows there too, just like a dog following a strong smell, right until he solves the case. I really like his reluctance to give up on a case because he knows it will unravel in front of his eyes if he only keeps at it a bit more.

Harry has a daughter, Maddie, who initially was mostly living with her mother, Eleanor, the ex-wife of Harry. The two lived in Hong Kong and only meet Harry a couple of times a year, until eventually Eleanor was killed while trying to save Maddie from Chinese gangsters. After the funeral, Maddie went to live with her father.

I was always thinking that the Harry Bosch books should be made into a few movies because they definitely deserve it. Thankfully the Michael Connelly books have already been translated to the TV in a series starring Titus Welliver, which I really loved watching.

Where else has Harry Bosch appeared beside in Michael Connelly’s books?

Michael Connelly was born in 1956 in Philadelphia, Pennsylvania. When he was 12 years old, his family moved to  Fort Lauderdale, Florida. There he enrolled at the St. Thomas Aquinas High School.

The author’s introduction to the world of crime happened in an entirely random way. One evening he was going home from his job as a dishwasher at a hotel. He suddenly noticed someone throw something into the bushes. Curious as he was, he checks out those bushes and found a gun wrapped in a shirt.

He got even more curious, so he decided to follow that person, a trek that took him to a nearby bar. He then went home to tell his dad about the guy and guy in the bar. Together, they went to the police, and he led them to the hidden gun. By then, the suspect was gone from the bar.

However, he was thoroughly fascinated with the way the police handled that case and he couldn’t get that event out of his mind.

Thus, the author Michael Connelly switched his major from construction to journalism. His minor was in creative writing, which helped him develop as a book writer. After his graduation from the university in 1980, he became a crime beat writer at the  Daytona Beach News Journal. Next year, he moved to work for the Fort Lauderdale News and Sun-Sentinel again as a crime beat.

He was working for the newspaper for three years when he wrote The Black Echo, his debut novel. The book was published in 1992 by Little, Brown. That books earned him the Mystery Writers of America’s Edgar Award for Best First Novel. The book is also the first in the Harry (Hieronymous) Bosch series.

Connelly continued his series until 1996 when he wrote The Poet. It was to become the first book in his Jack McEvoy series. The next year he wrote The Trunk Music, which went back to the popular Harry Bosch book series.

For his numerous books, Michael Connelly received several awards. Just to list a few, he received the Edgar Award, the Anthony Award, the Macavity Award, the Shamus Award, the Barry Award, as well as several international awards from countries like Italy, France, and Japan.

Many of his books are written surrounding actual, real-life events. The 9/11 attack was just one such event included in the author’s work. Most characters in the Michael Connelly series appear in the same universe and often crossover from series to series.

After the Harry Bosch novels, I think that the author’s second most popular series is Mickey Haller. The series currently includes five books, with the latest one published in 2013 with the title The Gods of Guilt.

The author’s newest series is Renee Ballard, with a first book titled The Late Show. The second book in the series, titled Dark Sacred Night, is published later in 2018 and it features both Renee and Harry.

I’ve read all the Harry Bosch so far written novels in order and I have to admit that they this series is one of my favorites ever, even though I’ve read almost everything else author Michael Connelly has written to date.

Michael Connelly has written so far two main series, the Harry Bosch series, and the Mickey Haller series, and a few smaller series including the Terry McCaleb, Jack McEvoy and the newer Renée Ballard series. Most of these series also intersect with the author’s main one, so I have added them to this page as well.

I have first heard about the author when I picked up The Black Echo at a local used books shop many years ago. I’ve read it not really knowing what it was about, only knowing that it’s a murder mystery book. After reading this book (which coincidentally happened to be the first in the Harry Bosch series) I went hunting for of the rest of the books that were already published, and I was lucky enough to read them in order (which is how I usually like to read my mystery series).