The Clive Cussler books in order include several popular book series such as Dirk Pitt, NUMA Files, Oregon Files, etc. Each of the series is well worth reading in chronological order, although it is not necessarily a must. If you do want to read the Dirk Pitt series in proper chronological order, you should start with Pacific Vortex which was published after The Mediterranean Caper but the events within come first.

So how many Clive Cussler books are there? Currently, if we combine all his series together, there are close to 80 books in total, all this without the author’s standalone novels, which are another five, a mixture of non-fiction books and children’s books.

So here are the Clive Cussler books in the right reading order for each fictional series – the books are in chronological order, with the publication date listed next to each book.

Below you will also find the latest Clive Cussler books. 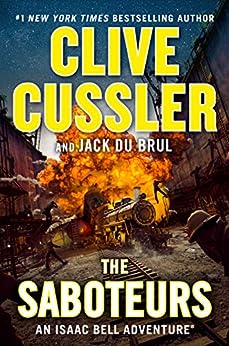 The first Dirk Pitt book (and the author’s debut novel), The Mediterranean Caper was written back in 1973, however chronologically it comes second after Pacific Vortex, which was published in 1983, but takes place some years before The Mediterranean Caper. Where the order of publication differs from chronological order, I will list the orders in brackets next to the books.

The NUMA Files book series has been co-authored with several other authors, including Paul Kemprecos, popular for his nautical mystery novels, including Neptune’s Eye, Cool Blue Tomb, and The Mayflower Murder, and Graham Brown. The NUMA Files is the author’s second series, started right after Dirk Pitt.

The Oregon Files Books In Order

The Oregon Files book series has been co-authored by Clive Cussler with Craig Dirgo, known for his John Taft series, with Jack Du Brul, an author known for Philip Mercer archaeological/adventure thriller series, and with Boyd Morrison. The Oregon Files is the author’s third written book series, right after his Dirk Pitt series and the NUMA Files series.

Clive Cussler co-authored the Isaac Bell Adventures with Justin Scott, known for his Ben Abbott mystery series. Isaac Bell is a private investigator with the Van Dorn Detective Agency, an establishment he based on the real-life Pinkerton Agency. The Isaac Bell series is the author’s fourth one written after his Dirk Pitt series, NUMA Files, and Oregon Files.

So there you have them, all the Clive Cussler books in chronological order from the first to the latest in each adventure book series the author wrote, and often co-authored with other writers.

Born in 1931 in Aurora, Illinois, the author Clive Cussler grew up in Alhambra, California. He went to the Pasadena City College where he remained for two years after which e dropped out in order to enlist in the US Air Force where he got to the rank of sergeant. During his time with the army, he worked as a flight engineer and aircraft mechanic in Hawaii during the Korean War. It was during this time that he discovered scuba diving and his passion for it, one that will be with him throughout his entire life.

His first job after leaving the army was that of an advertising copywriter, after which he became a creative director for two important advertising agencies in the country.

Clive Cussler wrote his first book in 1965, 15 years after he’s been working as a copywriter while being at home with the kids as his wife was working night shifts at the police department. It took him 18 years to publish his very first novel under the title Pacific Vortex.

Over the years he wrote numerous books alone and in cooperation with other authors, in creating several popular book series, including his Dirk Pitt series, the NUMA Files, the Oregon Files, the Isaac Bell Adventures and the Fargo Adventures. He also wrote several non-fiction books, with his first one being The Sea Hunters, written in 1996.

With so many books written under his belt, if you’re looking to read the Clive Cussler books in order, considering that there are several series that he put out so far, it might be a tad difficult to navigate the sea of his novels and find out which comes before which book and what is the right order of his many book series.

I’ve started reading the books by Clive Cussler in chronological order (his Dirk Pitt series) back in the 80s when I first discovered them. At the time he and Tom Clancy where my main mystery authors that I was religiously following – Tom Clancy with his political thrillers and Mr. Cussler with his maritime adventure mysteries called Dirk Pitt, with the main character named after the author’s son called Dirk Cussler, with whom he actually co-authored some of his later Dirk Pitt books.

Now just to see the huge amount of books written by this author, the Dirk Pitt series has so far 25 books, the NUMA Files series includes 15 books, the Oregon Files 13 books, the Isaac Bell Adventures 10 books and The Fargo Adventures 10 books, not to mention the several standalone and non-fiction books he has written during his lifetime. That makes it a total of over 70 books published to date, with each year the number getting bigger and bigger.

He also wrote 2 kids’ books and 4 non-fiction books, among which one is a book I’ve read called Clive Cussler and Dirk Pitt Revealed. It’s worth checking it out.

Even at this advanced age (over 80-years-old), our favorite novelist, Clive Cussler, still likes to scuba dive (a hobby which is well reflected in his Dirk Pitt adventure novels). He is living in Paradise Valley, Arizona where he writes (in his shed) his next book. He co-authors with 5 other novelists, one of them being his own son, Dirk who helped his dad write several of the latest Dirk Pitt novels.

Of course, the main character of his most popular book series, Dirk Pitt, was named after his son. Dirk started working with Clive Cussler in 2004, after he left his job as a controller at Motorola Iridium in Phoenix.

When he does the research for the next books, the author Clive Cussler likes to take real-life events and twist them to suit the needs of his main characters and storyline. For example, in his novel The Assassin, Isaac Bell #8, he invented a story about investigating real-life John D. Rockefeller’s Standard Oil monopoly.

While he still writes books, Clive Cussler is more in a rewriting stage these days. The authors write the first 100 or so pages, which they then send them to Clive to check and edit, following which they get it back from him to continue the stories.

So far this agency found over 60 shipwrecks and donated their findings to museums or various related government agencies.

As for the question of whether we should read the Clive Cussler book series in order, I think it’s not absolutely necessary. Each book has a starting and ending story, so they can be perfectly read on their own, out of order.

Having said that, many books have references to previous novels that might enrich your reading experience if you know what the author is talking about.

I personally prefer reading all my mystery series in order, even when if they really don’t have to strictly be.